Riddhi Sen to be given Best Actor award for the film Nagarkirtan;

The 65th National Film Awards 2017 were announced today by the Chairpersons of the juries on Feature Films, Best Writing on Cinema and members of Dadasaheb Phalke Award and Non-Feature films. The Feature Film Central panel was headed by Shri Shekhar Kapur, an eminent filmmaker known for his works in Hindi cinema and international cinema. The Non- Feature Film panel was headed by Shri. Nakul Kamte and the Best Cinema on Writing jury by Shri.Anant Vijay. The National Film Awards would be presented by Hon’ble President of India on May 3rd, 2018. The Jury Chairpersons of the 65th National Film Awards had submitted its report to the Minister of Information & Broadcasting, Smt. Smriti Zubin Irani on 12.04.2018. 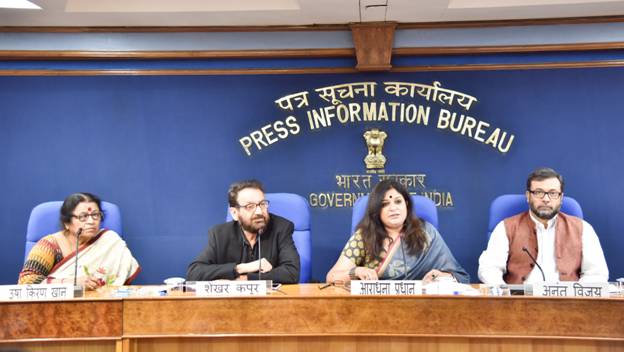 Veteran Hindi film actor Shri Vinod Khanna was awarded the Dadasaheb Phalke Award for his contribution to Indian Cinema. Some of the other prominent winners in various categories for this year National Film Awards included Assamese movie ‘Village Rockstars’ in Best Feature Film category and ‘Baahubali - The Conclusion’ in the Best Popular Film providing Wholesome Entertainment category. Indira Gandhi Award For Best Debut Film Of A Director was given to the Jasari language movie ‘Sinjar’ directed by Pampally. Marathi Movie ‘Dhappa’ was awarded the Nargis Dutt Award For Best Feature Film On National Integration. Jayaraj was awarded the Best Direction in the Feature Film category for the movie ‘Bhayanakam’ and Nagraj Manjule won the award for the Best Direction in the Non Feature Film Category. Riddhi Sen and Sridevi got the award for the Best Actor (movie- Nagarkirtan) and Best Actress award (movie- Mom) respectively .

Malayalam Movie ‘Aaalorukkam’, directed by V.C.Abhilash was awarded the Best Film on Social Issues. ‘Water Baby’ directed by Pia Shah, won the Best Debut Film of a Director in the Non Feature Film category.
Movies in the languages other than those specified in the VIII Schedule of the constitution in the feature Film categories were also awarded. The award for the Best Jasari Film was given to ‘Sinjar’, Best Tulu Film to ‘Paddayi’ and the Best Ladakhi Film to ‘Walking With The Wind’.

Extension of Emergency Credit Line Guarantee Scheme through ECLGS 2.0 for the 26 sectors identified by the Kamath Committee and the healthcare sector